Build a Better Brain with Exercise 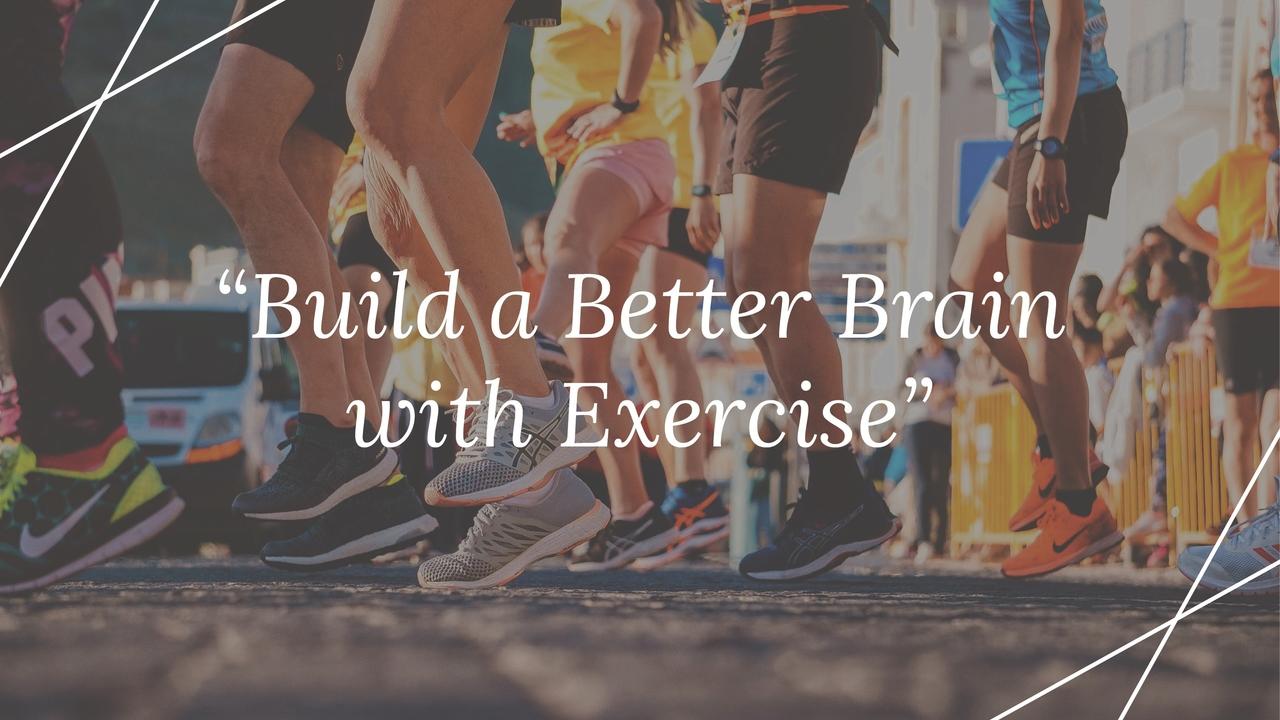 Most people are motivated to workout for the physical benefits-losing weight, toning up, getting healthy and looking good.

But there’s a growing body of scientific researching showing it’s just as important, if not more so, to work up a good sweat to give us a bigger, smarter, more successful brain. If you want to optimize your life, it’s time to put down the remote, step away from the computer, and get your heart rate up through exercise.

How do we know exercise builds a better brain?

The studies are overwhelming.  In fact, in 2011, The Mayo Clinic went through 1,600 papers on exercise and there was no disputing, exercise had a definite positive effect on memory, learning, performance and motivation.

The research continues to explode and confirm the striking link.  Even a 2014 study out at Stanford University found that just by doing something as simple as walking, creative output was increased by 60% while walking and the effect continued for the next 10 minutes after they stopped.  Many high tech companies now have walking meetings and Richard Branson has eliminated chairs from his offices.  People are more engaged and creative.

As a Psychiatrist, and Clinical Assistant Professor at Harvard Medical School, who studies the brain, it wasn’t a lab report or research paper that sparked my interest in the brain/fitness connection.  It was a public High School in Naperville, Illinois.  This district of 19,000 students found that it was usually the jocks, who really didn’t need to work out, who were mainly engaging in Physical Education class.  They smartly change up their PE program to focus on getting everybody participating. Heart rate monitors played a part in their grades, and it was often found that the kids who didn’t appear all that athletic, were actually working harder in PE than some of the school athletes, and everybody was getting fit.  With the national average of obesity being 33%, they eventually got down to 3%. But the kids weren’t just getting more fit, teachers saw that they were testing better. The school petitioned to enter as their own country for the TIMMS test, a world wide standardize test on Math and Science ability, where the US usually lands in the high teens or 20s.  Naperville School district 203, tacking it as a country, came in #1 in the world in Science and #6 in Math—and a key factor was their physical education program that over 20 years  had evolved so that every student was spending 40 minutes a day focusing on their fitness in his or her daily physical education class.  This led me to Naperville, and eventually, to write, Spark, The Revolutionary New Science of Exercise and the Brain.

How does exercise make us smarter?

To unpack this finding, I went back to the beginning of the revolution in the early 90s, when we learned that exercise was a good activity to prevent cognitive decline and thus Alzheimer’s disease.  Scientists were amazed, and one of them, Dr. Carl Cotman, began to study this in the laboratory using mice to see what exercise did to the brain to make it resilient to the aging process.  He tested the intellectual capabilities of a group of mice- then trained them to run on a running wheel, finding that they did this willingly and ran up to 4 kilometers a night on their own.  After a week or so, he retested them and found that they had a big improvement on his tests. He looked at their brains to see why.  Cotman found that their cortex was bigger and thicker - an indication that their brain cells had grown and became more connected over this relatively short period of time.  He also weighed their brains, and they were not only heavier,  he discovered that a key area of the brain, the hippocampus, was bigger.  The key factor that led to this growth was identified as BDNF, or Brain Derived Neurotrophic Factor, a cumbersome name for a key Growth Factor, so I call it Miracle Grow for the Brain.  Exercise is truly a brain fertilizer.

This set neuroscience off on a race to unpack the magic of exercise.  We learned that exercise turned on our attention system and sparked our frontal cortex that activates our Executive Function Network, or the CEO of the brain, that helps us to optimize our thinking and learning.   We also learned that exercise promoted the growth of our 100 billion brain cells, and sped up our ability to make brand new brain cells.  It turns out our big brains evolved to help us be the best movers we could be. As we added more brain parts during our hunter-gatherer period, these eventually were co-opted to think with, so that now when we move we are turning on our thinking brain.

What should we do?

So jump up and get moving. The evidence seems clear that moving, exercising, playing or about 20-30 minutes or so on a daily basis, is the best way to make us smarter.  Any type of exercise will do – Yoga, tai chi, fast walking, jogging, biking, swimming, and strength training all will improve our attention, memory, thinking, and deepen our understanding and competence in whatever world in which we are involved.  The intensity and duration will depend on your level of fitness, but the best strategy is to get a daily dose of moderate exercise that is varied if possible.  Moderate intensity is getting your heart rate between 70-75% of your maximum for a total of 150 minutes/week.  It is best to do it outside, with a friend or group, and having it be fun so you will return to it and make a commitment to it.   In a later blog, I will focus on High Intensity Interval Training, which is shorter bursts at a higher rate, such as Tabata and Cross Fit,  but for now, following the guidelines of Health and Human Services actually has some science behind it.  Also, we know before a test or big presentation, a quick burst for 4-8 minutes of pushups, jump rope, or walking up and down the stairs will give us a leg up,  preparing us to be the best we can be.

John J. Ratey, MD, is an Associate Clinical Professor of Psychiatry at Harvard Medical School and an internationally recognized expert in Neuropsychiatry. He has published over 60 peer-reviewed articles, and 11 books published in 15 languages, including the groundbreaking ADHD Driven to Distraction series with Ned Hallowell, MD. With the publication of Spark: The Revolutionary New Science of Exercise and the Brain, Dr. Ratey has established himself as one of the world's foremost authorities on the brain-fitness connection. His latest book, Go Wild, explores how we can achieve optimal physical and mental health by getting in touch with our caveman roots, and how we can “re-wild” our lives.