You're Designed to Plan for the Future 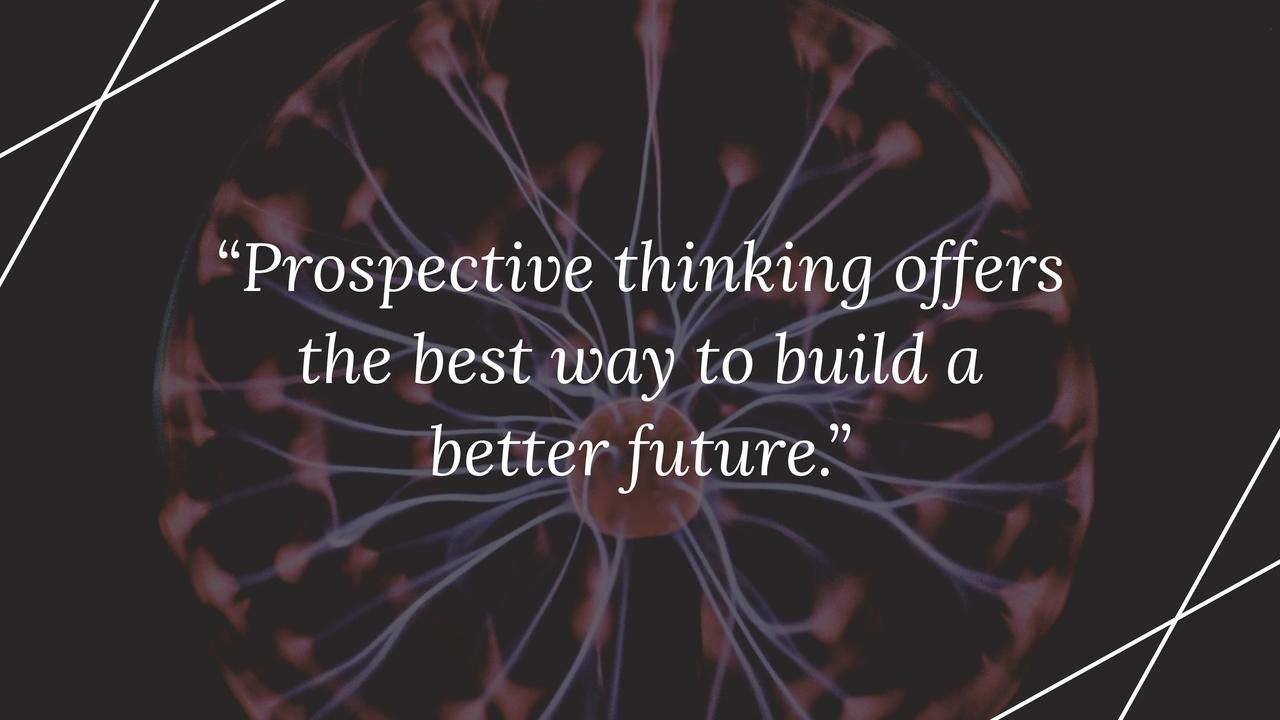 Some years ago, my friend Martin Seligman remarked on a mismatch between psychology’s research findings and his personal experience. He pointed out that psychology explains behavior by focusing on the past: reinforcement history, prior traumas, Oedipus complexes, socialization, and more. But in his own daily life, he found himself generally thinking about the future. Sure enough, as we delved into the research on human thinking, the imbalance was profound. There are tens of thousands of studies on memory, but only a smattering of studies on thinking into the future. We took this as a challenge and opportunity, and indeed I’ve been working with various other talented people to start to learn what we can about how people think about the future.

First, a shift in emphasis seemed necessary. When psychologists have gotten around to studying thoughts about the future, they usually converge on studying predictions. There is actually some wonderfully creative work on prediction, ranging from people’s efforts to predict their own future emotional reactions, to predicting geopolitical events and outcomes. I admire that work — but I think it leaves out some of the most important stuff. 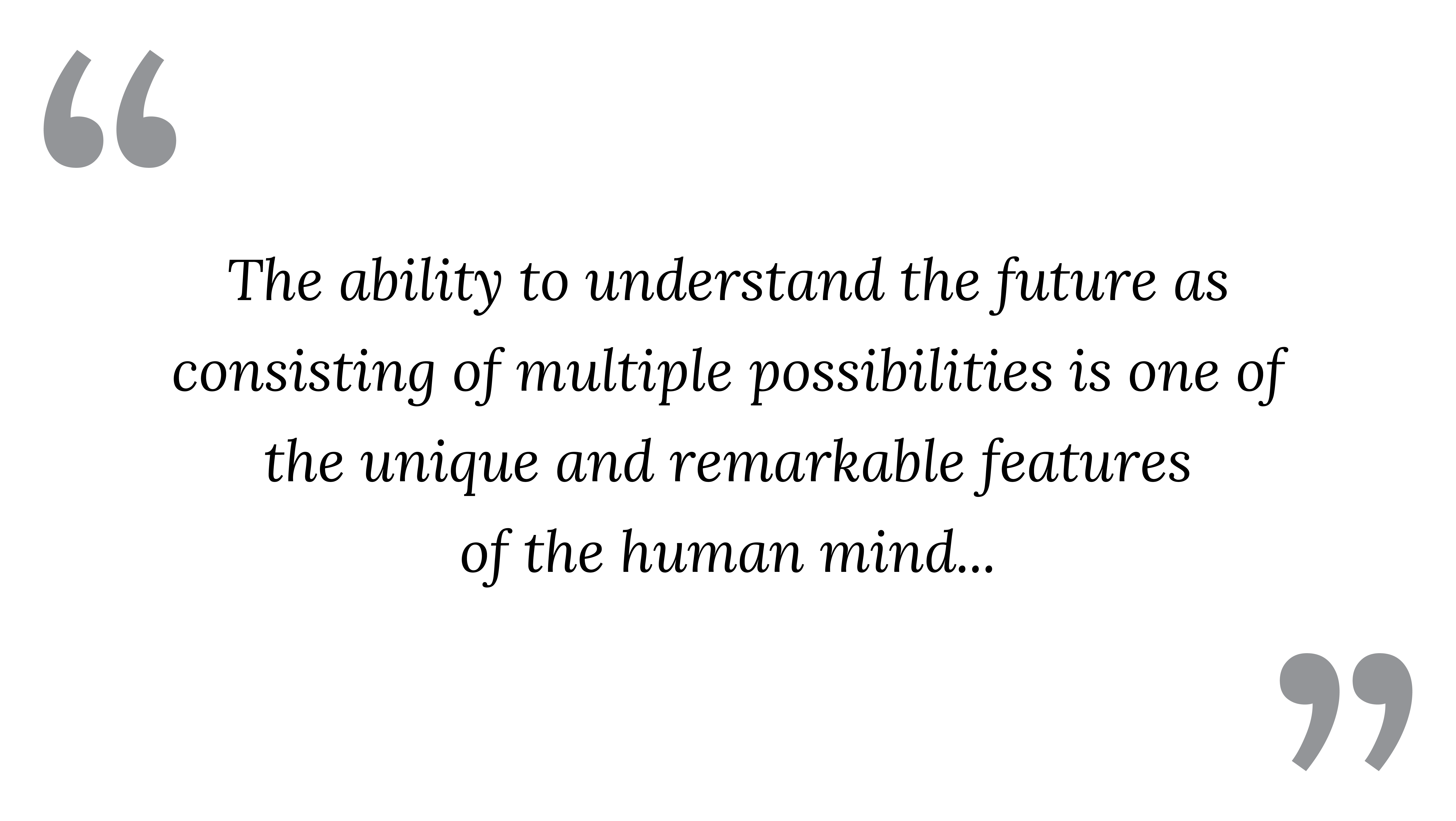 My group’s approach is on what we call “pragmatic prospection.” Predicting the future is fine, but when people think about the future, they are mostly preparing for action (hence the “pragmatic”). The most pressing thought about the future is not “What is going to happen?” but rather, “What do I need to be ready to do?” Indeed, predicting how things will turn out in the end is not as important as predicting the points at which things could go in different directions. People think of the future not so much as a road leading to a particular destination, but instead a “matrix of maybe”: A set of options and possibilities, some of which will come true and some of which will not. (And crucially, points at which one’s own actions can steer events toward some maybes and away from others.)

The ability to understand the future as consisting of multiple possibilities is one of the unique and remarkable features of the human mind, as shown in some terrific recent studies by Redshaw and Suddendorf. They started with a simple task: The experimenter drops a treat into the top of a plastic tube, and it comes out the bottom, where either the research subject catches it or it falls into a hole and is gone forever. Humans and apes can learn to catch the treat. But then the researchers modified the tube so there were two openings at the bottom (essentially it looked like an upside-down Y). There was no way of knowing which opening the treat would come out of. Two-year-old children would just guess, putting a hand under one or the other, and so they would get the treat half the time. Three-year-olds soon figured out that by using both hands they could catch it every time, and older children got this right from the start. But grown-up chimps and other apes never figured it out. Occasionally one of them would get it right by using both hands, but the ape failed to realize that that would always work, and then just went back to guessing. Apparently, our closest animal relatives are unable to think of the future in terms of multiple alternative possibilities. Only humans can do this.

Thinking about the future as a matrix of maybe is probably the most useful and effective way to do this. There are some findings indicating that the most effective leaders are not any better than other leaders at predicting what will happen — but they do carefully think about and prepare for multiple, alternative possibilities. Contrary to the long tradition of fortune tellers and other prognosticators who claim to be able to see the future, there is no single destiny or fate that is bound to happen. (With all due respect to death and taxes…) Doing a good job of thinking about the future means thinking through all the multiple alternative possibilities and what is contingent on what.

One of our projects has shown this flexibility in forward thinking. We pitted two clichés against each other as to how people think about a remote, possibly unattainable goal: Is “the grass is always greener on the other side of the fence,” such that hard-to-reach goals should produce the greatest happiness? Or, like Aesop’s “The Fox and the Grapes,”do people downplay their potential joy over a remote goal? Sjåstad and I had people take a 6- item test of what we called “intuitive intelligence,” and told people by random assignment that they either got 2 or 5 of the 6 correct. Then we told them they would take a second test, with a prize for getting them all correct, and we asked them how happy they would be if they scored a perfect 6 of 6 correct.

When predicting how other people would react, people followed the greener-grass principle. They thought someone who improved from 2 to 6 correct would be happier than someone who merely improved from 5 to 6.  But when predicting their own reactions, they showed the opposite fox-grapes pattern. The people who only got 2 right said they would not be happy to score a perfect 6, whereas the ones who got 5 thought improving to 6 would be great. When people took the second test and were told they got a perfect 6, everyone was quite happy regardless of first-round score! 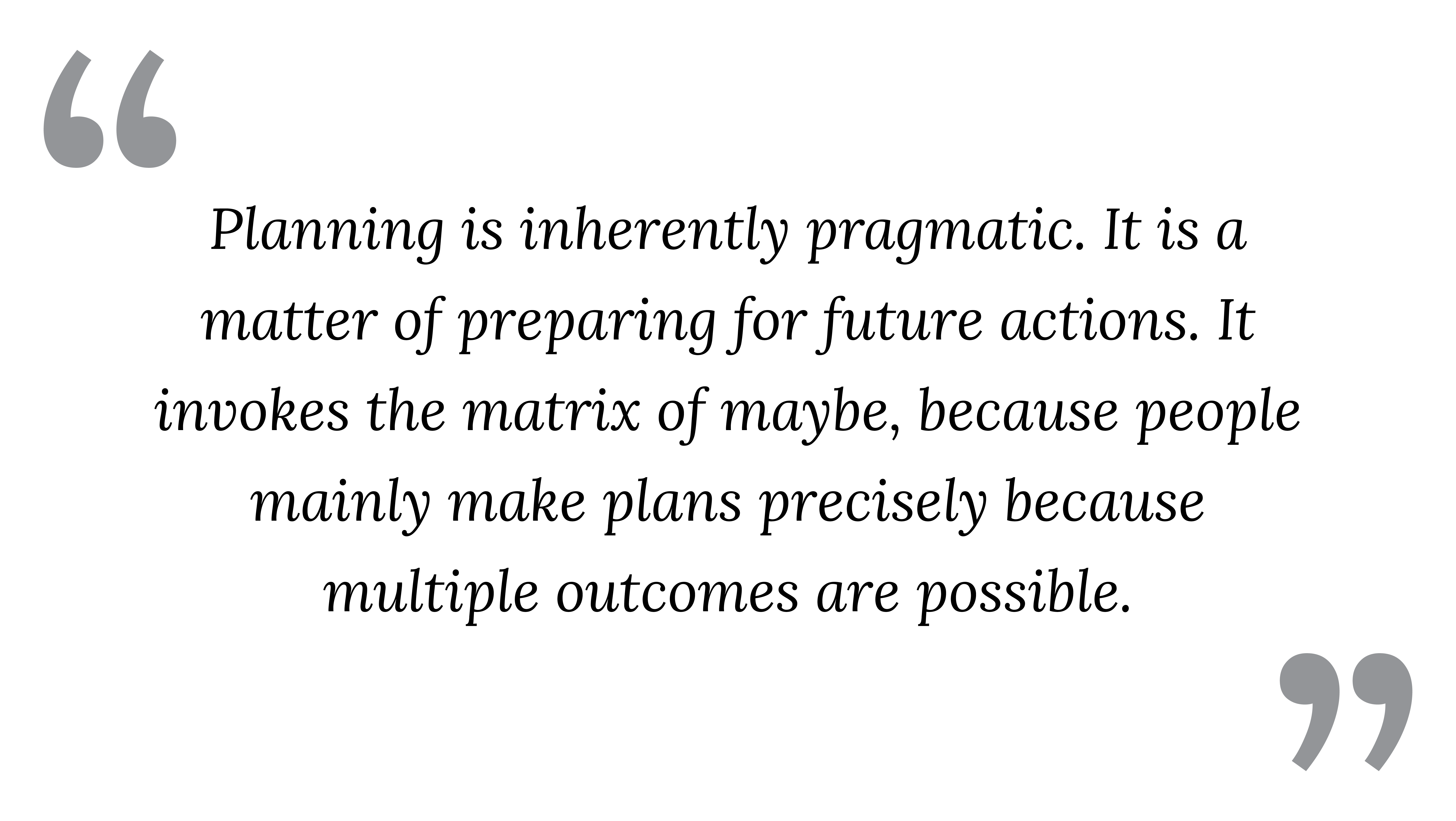 Thus, when people think about their own future reactions, they bias their predictions in pragmatic ways. If they have a chance of success, they think that their own happiness is riding on how well they do. That likely motivates them to try harder and do well. In contrast, if in the first round they think they have very little chance of success, they disengage, such as by telling themselves that they wouldn’t feel much joy even if they were to succeed. So why bother? Again, present wants and needs influence how people project into the future.

In a study that followed people as they went about their daily lives and tracked their thoughts at randomly chosen moments, we found plenty of evidence of pragmatic prospection. People mainly think about the near rather than the distant future. After all, it’s urgent to prepare for tomorrow and the next day, whereas preparing for the distant future can wait. Above all, we found that three quarters of thoughts about the future involve planning. Given the diversity of human thought, it is shocking to find one category of thoughts to be so much more frequent than all others.

Planning is inherently pragmatic. It is a matter of preparing for future actions. It invokes the matrix of maybe, because people mainly make plans precisely because multiple outcomes are possible.The reason for making a battle plan, for example, is precisely that both winning and losing are possible, and someone really wants to win the battle. Planning lays down decisions in advance so that we don’t have to ponder and contemplate in the heat of the moment, and already have decided the best choice to make.

A recent line of work in psychology has extolled the benefits of “mindfulness,” akin to the meditative practices of focusing one’s mind on the here and now. Mindfulness emphasizes the present, to the detriment of the future. Our work has confirmed the value of this approach: People are happier when they think about the immediate present, and they have less anger, anxiety, stress, and other negative emotions. However, we also find that focusing purely on the present reduces the meaningfulness of thoughts. Thinking about the future is the most meaningful, followed by the past, and then followed by the present. Moreover, the most meaningful thoughts are the ones that combine past, present, and future.

Thinking about the future is thus one of the most advanced and nearly unique capabilities of the human mind. It is also an important key to success. After all, it is too late to change the past, but the future remains open. Prospective thinking offers the best way to build a better future.

Roy F. Baumeister is currently professor of psychology at the University of Queensland. He is among the most prolific and most frequently cited psychologists in the world, with over 600 publications. His 35 books include the New York Times bestseller Willpower. His research covers self and identity, self-regulation, interpersonal rejection and the need to belong, sexuality and gender, aggression, self-esteem, meaning, consciousness, free will, and self-presentation. In 2013 he received the William James Award for lifetime achievement in psychological science (the Association for Psychological Science’s highest honor).