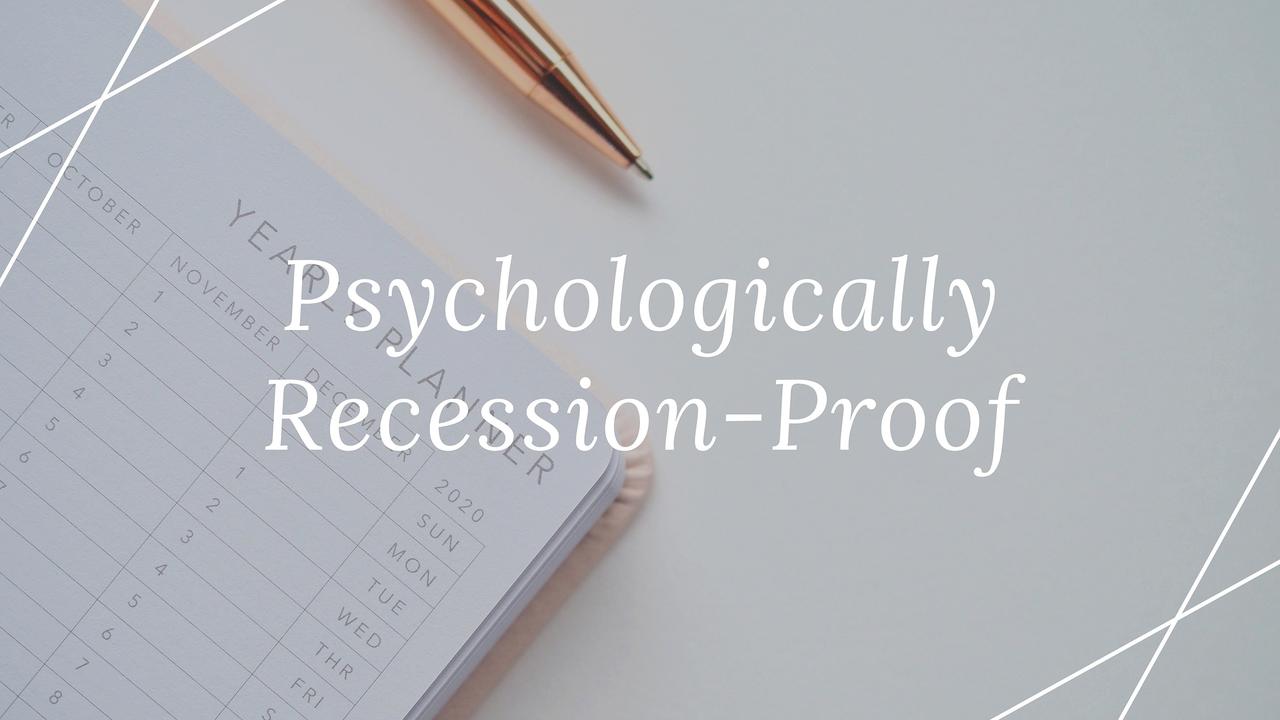 People are, understandably, worried about the prospect of a new economic recession. Knowing what to expect and how to prepare can be key to successfully becoming psychologically recession-proof.

It occasionally strikes me as funny to write a blog about personal success. Sure, it feels good to share my expertise and it is rewarding to think that I might potentially impact a reader’s life. Even so, every once in a while I scratch my head and wonder at what I write. I find myself asking questions such as “Did I really just advise readers that ‘planning ahead’ is an important part of success?” Sometimes success advice can sound a bit obvious, which is why I hope you will forgive me if I offer the following advice: You should plan ahead.

The idea of considering and preparing for the future is an age-old piece of wisdom. The Boy Scout motto is “be prepared,” deadlines at work help structure our time, and Benjamin Franklin once quipped, “By failing to prepare you prepare to fail.” Clearly, the human ability to think about the future and plan accordingly is a gift and a virtue.

In fact, you do it all the time; you purchase plane tickets and make dinner reservations, you schedule calls, read reports in advance of work meetings, and maybe buy gifts for your partner for your anniversary. The psychologist Roy Baumeister and his colleagues discovered that people think a whole lot more about the future than they do about the past and that even when folks are dwelling on the past, they are often doing it as a way to prepare for the future.

You get it. People are future-oriented, and you are no exception. So, how does this information, as obvious as it sounds, help? Simply put, as good as people are at planning family vacations, they tend not to be so awesome at planning for bad events. A number of recent surveys reveal that relatively few people have a disaster plan in place. It may be that people don’t want to think about the potentially devastating effects of floods and earthquakes; or it may be that they blindly believe that they will personally be spared, or it may be that far off and irregular events simply don’t cross their minds.

Which leads me—at long last—to the topic of this post: preparing for economic recession. If you have access to newspapers, television, or the Internet, you have likely heard whispers of a coming recession. Pundits are not afraid of an economic downturn as serious as the one that shook the world in 2008 but they do predict more minor tremors. Fortunately, you don’t have to wait around biting your nails and worrying about how bad everything might get. You can plan ahead.

Part 2: What is the actual impact of a recession?

Let’s start the process by tacking stock of what, exactly, you might be preparing for. To do so, we would need to understand the effects of an economic recession. The Great Recession of 2008 is far enough in the past that there has been adequate time to research its effects. For instance, a number of studies reveal that economic recessions are associated with a rise in anxiety, depression and similar mental illnesses; and that this trend is especially pronounced among people who actually lose their job as the result of the economic downturn.

In one study, researchers investigated the potential impacts of the Great Recession on Americans. Their findings provide a general blueprint for what you might expect for yourself under equally dramatic economic circumstances:

Let’s put that another way: if an oncoming recession were as large and impactful as the Great Recession, 97% of people would neither declare bankruptcy nor lose their house. 80 to 90% of people would neither lose their job nor rack up any additional credit card debt. Most people, however, would be a bit more careful with their spending. In a similar study, researchers examined many studies to better understand the link between the Great Recession and health behaviors. They found that alcohol consumption fell (although it did rise among people who lost their jobs) and that people generally eat less healthy food.

Taken together, these studies reveal that economic recession can be bad for a person’s pocketbook, health and mental state. This is particularly true if they lose their job or their house. For most people, however, the impact of a recession is less catastrophic than you might guess. There is a bit of “belt-tightening,” and a tendency to eat a little more junk food.  Being a more intentional spender and being aware of the health consequences of your diet aren’t all that bad: in fact, these are considerations that might be wonderful for you to start right away, before any recession even arrives!

The science of happiness has grown dramatically in the last thirty years and studies on money and happiness, specifically, have skyrocketed. We have learned a lot about the happiness of the very wealthy and of the very poor. Although it is a broad and nuanced research literature, I will sum it up in just a few sentences. Here goes: money buys happiness, but only a little bit. For some readers, the idea that money is associated with a person’s happiness might sound like ugly materialism. The truth is, money provides the stuff we value: educational and recreational opportunities, a sense of security, comforts and conveniences, and the ability to help those in need. Where making yourself psychologically recession-proof is concerned, two findings from the money-happiness research stand out.

The power of money to influence happiness depends, in part, on how you spend it. There is a humorous quip, “If you don’t think money buys happiness, you aren’t spending it right.” There is some truth to that, in that money can be spent on better or worse things, where happiness is concerned. Donating money to charity, for example, seems to pretty consistently pay out happiness dividends. Similarly, purchasing experiences rather than material seems to be a better bet for happiness. Think about it: after an initial rush of excitement, you will adapt to those new shoes, or new car, or new granite kitchen counters. Experiences, by contrast, are events that you can share and re-live in your memory. Going for a hike, or seeing a football game, or swimming with friends are—dollar for dollar—better happiness investments.

The good news, where a potential economic recession is concerned, is that much of the happiness that money buys can be had at event discounted prices. You don’t need a first-class trip to Europe to relish in a novel experience, for example. You can derive the same psychological benefit at the fraction of the price by exploring a nearby town, taking a course at the local community college, or joining a recreational sports league.

Second, how you think about time versus money. We know from multiple studies that people who value money in and of itself tend to be less happy. These materialists often sacrifice important elements of life such as love, connection, and free time, in their pursuit of a paycheck. This should serve as a cautionary tale: money isn’t an end in itself; it is useful because it is a resource. Even if your paycheck shrinks it should be reassuring that you have other valuable resources such as your time and your relationships. If a future recession pinches your pocketbook you can still enjoy your time and your loved ones.

In the end, this is not really a post about how to be happy. Nor, actually, is it even a post about how to manage your money. Instead, it is a focus on planning for the future. As obvious as this sounds, I want to emphasize that you can plan for even large and intimidating future events. Rather than fretting about the potential adversity that might come with global warming, changes in government, an economic recession, or the passing of elderly loved ones, you can plan for these events. Figure out how you would like your life to be given the constraints of these various circumstances. Identify what you do and do not have control of. In doing so, you can create a life instead of waiting around for a life to happen to you.